For those of you that have followed me on my personal Facebook page, please bear with me as you have seen some of this before.

Adjusting to a New Management Style

Remember how I told you that my new boss was a micromanager? She apparently felt the need to inspect the bottom rack of the dishwasher to ensure I unloaded it properly. I was told later that she could have broken the door by sitting on it. See, I’m learning already!

Before taking on my new job, I had started a list of all the projects around the house that I want to complete in all the additional time I will have at home not sitting at a computer (I used three different tenses in that sentence; grammar police have at it). Sarah feels that I am being overzealous. I respectfully disagree. Anyway, I am happy to say that I crossed one item off the list, which was to do something about the shoe racks in the mud room/laundry room, which is right inside our door to the garage.

Previously, we had been using a pair of stacked shoe rack shelves to hold all the tennis shoes, cleats, flip-flops, dress shoes, etc. for a six person family. This idea started out fine at first, but eventually the shoe racks were overflowing and everyone decided (to my chagrin) that it would be better to just dump their shoes anywhere inside the door in a big pile. I wish I had some before pictures, but you’ll have to take my word for it. I would complain endlessly about this, which in turn drove Sarah crazy. She told me if I wanted to change it that I needed to do something about it. Is that how that works? So, I added it to the list and made it a first-week priority.

Since the two older kids play soccer, they had the largest collection of hazardous materials: shin guards, socks, uniforms, cleats, etc. and thus took the most space. So, I brought in an unused cubby shelf (that’s the technical term, I think) and used it as a locker of sorts. I also continued to use the shoe racks, but for what they were actually intended. During the process of sorting out shoes, I found almost 10 individual shoes that did not have a match. I have no idea how this happened (most were kid shoes – hmmm), and I was fortunately able to pitch them and free up more space. Below is the end result.

Those that know me well know that health and nutrition are very important topics for me. I was overweight for most of my life, but in January of last year I decided to make serious changes in my eating habits and lost 70 pounds over the year. I will blog about this transformation separately because people often ask me about it.

One of my many goals in being a SAHD is to cook healthier, all-natural (organic) meals for the family. So, what better way to start than have two fat- and calorie-loaded pasta dishes as my first attempts? To be fair, I did get the natural ingredients part down, which to me, is the more important of the two.

My first one was a mac & cheese bake. It involved making my first roux, which I was proud of (it is just flour and butter, but I felt cool saying I made a roux). The end result was decent. It didn’t have a ton of flavor, but it wasn’t bad either. My second dish came out much better. It was a baked ziti (pictured below – substitute penne for ziti, so I guess it was a baked penne?). Again, not low cal or fat, but all-natural ingredients and it tasted really good. To my credit, I did use mostly whole-wheat pasta and ground turkey instead of beef. 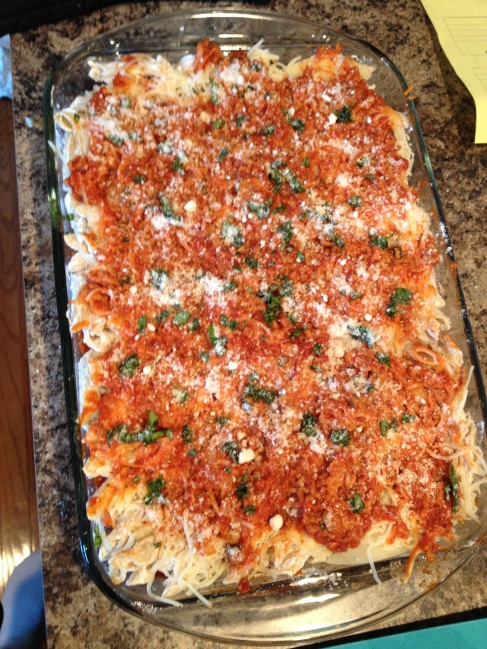 Keeping with the food topic, I will end my first post with a story reminding parents that younger kids have a penchant for taking everything literally. I was picking up toys in the dining room (which was converted to a play room) and overheard the following conversation between my two sons in the kitchen:
Grayson (two year old): “I want a cookie.”
Cam (six year old): “No Grayson. You’re not just going to eat crap all day.” (It’s funny how kids mimic everything their parents say.)
Grayson: “OK. I eat crap then.” He then reaches for a cookie sitting on our kitchen island. I intervened at this point, trying unsuccessfully not to laugh. He had pulled over a chair from our table (a skill he learned by watching his older brother and sister) and was climbing onto the island. I try to thwart the effort and was met with, “I eat crap though! I eat crap!”

I did ultimately get him to agree to an apple.

He looks so innocent. Believe me, he’s not.

Until next time – Chris (Active dad at home)