Originally, I was going to take the day off from blogging. You know, so that I could actually do some of those things that I put on my SAHD list that I told you about in a previous post. Then the wife informed me of a Friday blogging trend to discuss seven different topics, link out to other blogs doing the same thing, and then add a link to my post on other blogs. Well, I’m all about easy publicity, plus I have a memorable enough story from today to share.

The park district in our area is extremely impressive as park districts go. One of their sites includes a small-scale farm with a variety of animals (pigs, chickens, horses, donkeys, LLAMAS!, and the like) and the kids can get to see them up close and personal (maybe a little too personal as we were early and fortunate enough to witness several of the pens being cleaned out after last night’s “use”). So, the wife suggested that I take Grayson and Clare after dropping the older two off at school.

We were among the first people there, the weather was beautiful, and it was really nice to get the kids out of the house. Grayson had fun running up to the horses and chickens  and trying to talk to them. The conversation mostly involved food.

After we had been there for a little while, I noticed that the crowds started picking up. I also noticed that all of the additional visitors had at least one thing in common, none of them were men. Someone neglected to tell me that there was a stay-at-home mom (SAHM) convention at the farm this morning. I kept envisioning the moms taking their kids around and having conversations such as this:

Average kid’s brother: “Whoa, mom! What animal is that and why is it out of its pen?!?”

Two: Getting Your Kids to Eat Food Other than Hot Dogs and Chicken Nuggets

Like many parents, it is a constant struggle for me to get the kids to try new food. This is particularly frustrating due to my desire to want them to eat a healthier variety of food. I have found this struggle to be more difficult with the boys than the girls (I have two of each). Recently, I had seen a recipe for a salami and pesto sandwich on Ciabatta bread (note that I am not claiming that salami is healthy). I knew my oldest daughter, Alexis would like it if I could just get her to try it (I also had a coupon for a loaf of Ciabatta bread, which of course did not influence my decision at all whatsoever). So, I bought the ingredients, which also included tomato and provolone cheese, though I left both of these off her sandwich because she claims to not like either. After I made her the sandwich, she took one look at the pesto and said, “Eww dad. I am not eating that.” Long story short(er), I did get her to agree to take a small bite and she loved it. In fact, she has now requested it twice since making it for her on Tuesday. The picture below shows the version I made for myself, which included both the tomato and cheese and I swapped turkey for the salami. 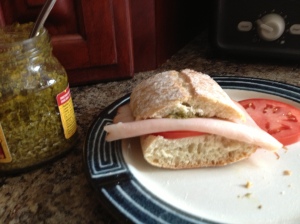 Parents, please let me know what techniques you have used to get your kids to eat different foods. I would love to hear any suggestions that you have!

Following up to the previous take, I am also trying to find different and healthier meal ideas for the wife and me. This week I made us an Indian dish: Chicken Tikka Masala with rice and garlic flat bread. Don’t get too excited. The sauce and rice came from a kit. Have you seen what actually goes into a Tikka Masala sauce? The ingredient list is longer than my kids’ school supply list. So, I played it safe this time. The end result was decent. Sarah appreciated the variety, even if she didn’t love the sauce. I will continue to experiment with different things and post the results.

We all have that one chore we just hate doing. You know, the one that makes our skin crawl just thinking about it. For my wife, that chore is unloading the dishwasher. In fact, she loathes it so much that she agreed to not cut her hair if I agreed to unload it every time (I have a thing for long hair, and yes, she still cut it anyway). Well, for me, that one chore is bathing the kids. Yes, I know it seems odd. Sarah likes to tease me that the grass and trees always need to be watered at the exact moment that the kids get into the tub. Hey, those trees were expensive and must be watered on a very specific schedule! No, of course it’s not at the same time every day. I practice modern sustainable watering techniques. The grass and trees must be watered precisely at the time it is most needed and only I know when the time is right.

My first and third grader are wrapping up their first week of school. We changed schools from last year, and so Sarah and I were obviously nervous about how the change would affect the kids. Would they like the new school? Would they quickly make new friends? Would they easily adjust to a significantly larger size? Would they get lost trying to find the bathrooms? You know, the important stuff. Well, I’m happy to report that both kids enjoyed their first week.

We were a little concerned about Cameron (first grader) after the first day because he wasn’t as upbeat about things as his sister. He was quiet and didn’t really complain except to say that no one really played with him on recess. He’s like this about most things, so I wasn’t overly concerned. We asked him again after the second day and his response was, “Yes, today was much better. We didn’t have church (Mass).” We were happy to hear the first part of this response, of course, so we let the second part go. He also said that he played basketball with the kids on recess and that one of the kids actually made a basket. That’s when Alexis (third grader) told us that the baskets are really tall. I asked Cam who he played with and he said he couldn’t remember anyone’s name. That’s just how he is.

Six: The Danger of Being a Writer and Blogging

So, I’ve noticed that the quality of my prose has significantly decreased as I have been trying to wrap up this post. In fact, I actually misspelled writer (“writter”) when I first typed the section title. One danger of being a writer and trying to frequently publish/distribute posts such as these is that there will be times when I am not at my best/sharpest. This is like a pitcher in baseball not having his “best stuff.” Now is one such time for me. Know that no one will be a harsher critic of my writing than me, so I probably invest more time pouring over the content than I should. For those of you that blog regularly, what advice would you have for producing quality pieces in a short time even when you are not at peak form?

Seven: Lessons Learned After the First Two Weeks at Home

Thanks for reading. Until next time – Chris (active dad at home)