One thing that I have learned as a parent of four kids is that just when I think that I have seen every weird behavior, strange personality quirk, or an insurmountably bizarre act coming from my baby/toddler, the next baby/toddler is always able to prove me wrong by raising the bar over his or her predecessors and taking weirdness to the next level.

Thus, it comes as no surprise that Clare (1) has managed to do this, though I should still probably be embarrassed to admit it. So, my sweet, adorable baby girl has an obsession with garbage and garbage cans. No matter where we are – home, neighbor’s house, restaurant, store, DOCTOR’S OFFICE – if there is a garbage can to be found, she will find it.

It would be one thing if she simply liked to play with the can, admired its aesthetic beauty, or enjoyed its company. Those things alone wouldn’t bother me terribly (though they would still be weird). However, Clare prefers to rummage around the can looking for snacks. She’s not picky, mind you. Three-day-old bread crust? Sounds tasty. Old banana peel sans banana? Delicious!

I swear that I do feed my child! A lot actually. In fact, she has the most diverse, accepting palate of all my kids. Grilled cheese (which my oldest despises), Clare will devour. Fruits and vegetables? She eats any and all without discrimination. Breads/cereals/grains? Yep. Chicken? No complaints there. Soap??? Err… I told you she doesn’t discriminate right? I’ll save that story for another day.

The situation has become so dire that we have to hide our garbage cans in closets and behind closed doors. I can’t help but feel sorry for her when she stares longingly at the pantry door in the kitchen, knowing that her precious is trapped within. And trust me, it’s no picnic to have to open the pantry every time I need to throw away something. I try my best to do it when she’s not looking so that I don’t repeatedly break her heart every time I close the door. There’s nothing more pathetic than a crestfallen toddler that can’t visit with her best friend, the garbage can.

So, next time active dad and clan come to visit your house, be sure to hide any and all garbage cans in your house before we arrive. You don’t want to break this poor girl’s heart do you?!?

Switching gears – my oldest son, Cam (6) recently switched schools, along with his older sister. The wife and I were a little nervous about how he would do with the transition and social aspects (i.e. making new friends). Well, I am happy to report that he loves his new school, has made several new friends, and has already been invited to a couple classmates’ parties.

Truly, I cannot think of a better way for two six-year-old boys to bond than to have a good old-fashioned lunchbox brawl! And, that’s exactly what happened. Cam and his new friend decided it would be a great idea to attack each other’s lunchbox (which, in Cam’s case, is actually an insulated bag) with his own while walking to the cafeteria.

Sounds like fun right? There was one small problem. They hadn’t actually eaten lunch yet, so all of their food was still inside their bags. In Cameron’s case, this included a tube of Gogurt (Yogurt), which happened to explode during the confrontation. I present the evidence:

Besides having an annoyed dad who had to clean up the aftermath that night, Cam also landed himself 5 minutes lost recess. Hey, but at least he made a new friend?!?

I took Clare and Grayson (2) to a different park this week after dropping the kids off at school. This one had a nice playground area set back in the woods and a half-mile walking track around some sports fields.

If you read my last post about taking the kids to a playground area, you should know that this time I never let Clare out of my reach, much less my sight. I don’t know if my heart could handle another episode of me jumping off a set of steps, and landing head-first on a two-story spiral slide as my one year old innocently slid to the bottom (also head-first), while imagining Child Protective Services coming after me, not to mention the other nearby parent pointing and staring.

Besides spending about an hour at the playground, we also made a full pass around the walking track and then some. Grayson walked the entire way. He was excited to see all the sports fields. 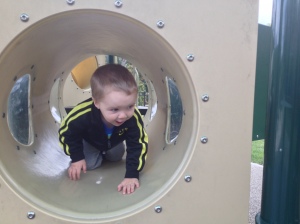 Lastly, I tried my hand at making all-natural, wheat flour sugar cookies. The ingredients were 100% natural, no GMOs. They came out a little dry (I used too much flour). The kids seemed to like them though.

That’s about as domestic as it gets from me.

Until next time – Chris (active dad at home)