To demonstrate that this phenomenon does, in fact, exist, I am presenting the five stages of parenting embarrassment and how I came to realize the existence of each stage when taking the kids to the library last week.

I’ll preface this by saying that it was a questionable decision on my part to take all four kids to the public library while the wife was at work. However, Grayson had asked about it repeatedly, and I definitely don’t want to discourage him from reading!

Stage 1 covers the “what could possibly go wrong?” mindset. Sure, a dad can take his four wound-up kids into the quietest environment imaginable and be able to manage fine. That’s what I thought too as I walked through those library doors.

Could I handle a scenario where each kid runs in separate directions once inside? Of course I could. The three year old starts pulling all the DVDs off the rack? No problem. The older two find a computer and turn into mindless zombies instead of helping me with the younger two? No worries. I’ll just chase around the (almost) two year old and pick up all the books that hit the floor in her wake. I do have pretty mad re-shelving skills.

Stage 2 covers “sure, my kid is being loud, but other parents’ kids are doing it too.” In my case, there were not actually any other kids the same age as mine in the library at the time, but there was one adult who was talking above a whisper. That’s the same as a three year old running around the library screaming, “look at this dad! They got Star Wars books!”

The standard “shhhh, library!” seemed completely lost on all of them, but in Grayson’s case, he was acting like the proverbial kid in a candy store. Honestly, his excitement was actually endearing, and had it been just a few shouts of elation over some Star Wars books and Thomas DVDs, I would have never moved past stage 2.

That was until Clare decided she wanted to look at the DVDs also. Grayson believed it was OK for him to pull down any DVD he wanted to look at, but apparently the same rule did not apply to Clare. So, he yelled at her to stop touching the DVDs, and she entered what I refer to as the “baby rage.”

Baby rage starts with a loud outburst of screaming and rapid stomping of feet, but all this is just a warmup for the epic conclusion. I look at it this way: the stomping and screaming is like the stretching of a rubber band. The faster and louder she is, the further the rubber band is stretched. Once the rubber band has reached maximum tension, it is released with unpredictable and often catastrophic results.

In this case, when the rubber band was released, Clare took off in a sprint, arms flailing, angry shouts flying, and hurled herself into a freestanding book cart, nearly sending the cart and its dozens of books crashing to the floor. It was like watching a scene from Looney Tunes. Running full speed, she leapt at the cart with arms and legs spread, slammed into the cart, and slowly slid down the front like Wile E. Coyote after being tricked by the Road Runner to run into the side of a mountain. The only thing that was missing was Grayson running up next to her and saying “beep beep” after she hit the floor.

Stage 3: False Control (i.e. “Punishment will be swift… as soon as I can think of something”)

Now we’ve moved into stage three, which is the stage where, as parents, we want to believe that we are still in control, and are willing to take drastic actions to show that we are.

Needing to get the situation under control, I put on my dictator hat. Grayson got threatened for sending Clare into the baby rage. Cam (almost 7) was ordered to stay with Clare (this failed epically). Alexis (9) was ordered to get off the computer and pick out some books or she got nothing because we needed to check out ASAP.

So, Alexis wandered off to find some books. I took Grayson to find some books (and get away from the DVDs) so that we can get what we needed and get out. We found a set of Ninjago and Spiderman books that Grayson was excited about. Cam came over saying it was unfair that Grayson was looking at Ninjago books and he was not (even though nothing was stopping him from looking before when he was sitting at the computer). Grayson got defensive that someone else was looking at “his” books. A brotherly argument ensues. Clare was nowhere to be found.

I found her on the far side of the library making faces at one of the employees. I escorted her back and told Alexis that time was up. She handed me a couple of books and informed me that she had to go to the bathroom. Of course she did.

I attempted to corral the other three kids while Alexis went to the bathroom. She went all the way to the back to discover that she needed a key, returned to the front to retrieve said key, and went back again. Then we waited. And waited. And waited. So, I finally go back to check on her, leaving Cam to watch Grayson (you’d think that I would learn to stop doing this).

A small wall divides the front of the library from the back. I had just reached the other side, when I hear Grayson start yelling, “Dad? Dad? Where are you, dad?” Of course, in my own non-library voice, I had to let him know that I was OK, that I wasn’t abducted or had decided to run out to the parking lot without them (tempting as it may have been). I return to the front to find him running in circles around shelves frantically searching for me.

Alexis finally reappears. I reassign her to younger sibling watch duty as I take the load of books and DVDs to check out. This shouldn’t be so hard, right? I hand over the stack and my card, pick up Clare and wait for the librarian to scan everything so that I can leave. She points at a computer on the far side of the desk, equipped with a scanner and card reader. I don’t go to the library often, so I don’t know exactly when this change was made, but apparently customers now have to scan all of their books, etc. out themselves.

I return Clare to the floor and start the self-scan process. I’m about five of twenty items deep when I hear the shouting match break out beside me. You know those rolling library stools? These things:

I turn to find Clare, Grayson, and Cam all attempting to stand on one at the same time, while Alexis is trying to pull them all back down off it. I really wish I had gotten a picture of this scene. My words will not do any justice. They were all fighting for position while simultaneously yelling at one another and at Alexis for trying to pull them off.

This sends the two librarians behind the desk into a full-on panic. One rushes around and tries to calm the kids down by giving them “I visited the library today” stickers. They couldn’t have cared less. In turn, I pull each kid down and seat them in a row in front of the desk.

Light bulb goes off. I tell Alexis to scan the rest of the books while I hold the other three in place. It seemed to make sense, but there’s always some variable that I forget to consider. Alexis starts scanning. Cam gets insanely jealous that he was not asked to scan also. So, he jumps up, says he wants to do it too, and grabs a book to scan. Alexis, being Alexis, gets defensive, tells Cam that “dad asked me to do it,” calls him a copycat, to which he responds that it’s not fair, blah, blah, blah. I don’t really remember what else was said. My mind had pretty much turned to mush by this point.

I stand back up, getting ready to take over scanning again, or just forget it and leave everything we hadn’t scanned. That’s when librarian #2 tells me, “don’t worry about scanning the rest. Just take the books and go. We trust that you’ll return them.”

This had to have been a first. This is the same library that calls your house threatening to send you to a collections agency when a book is two days overdue. I wasn’t sure whether to be offended, thankful, or just relieved, but I accepted the offer regardless. Although, a bag would have been nice also. Instead, Cam and Alexis each got a stack of books and DVDs, while I wrapped up Grayson and Clare in each arm and made the walk of shame out the door. I swear I heard everyone in the place burst into applause after we were two steps out the door.

My face was red with embarrassment as we walked back to the parking lot. I wish I could say that the story ended with us leaving, but it didn’t – not while I still had a little dignity left.

We reached the parking lot and Cam was struggling to carry all the books. He dropped a couple on the ground and tried to pick them up while still holding onto the rest. I told him to just leave them and I would come back and get them.

For those that know Cam, you know that he is literal to a fault. So, when I referred to the fallen books as “them,” he thought I was referring to all of the books he was carrying. He just looked at me, shrugged, and dropped the entire pile of books into the parking lot before hopping to the van and disappearing inside. Yeah, that just happened.

Still holding Grayson and Clare, I had to rush over to the van and load them into their seats before returning for the books. Once inside the van, we had to check to make sure we had everything (according to the receipt anyway). This included convincing Grayson that it was OK for us to look at his books to make sure we didn’t lose anything.

When it was finally over, while sitting in the sanctuary that was the minivan, I broke out into laughter. Concerned, Alexis asked me, “dad are you OK? Why are you laughing?”

“I don’t know whether to laugh or cry, but laughing feels better.” 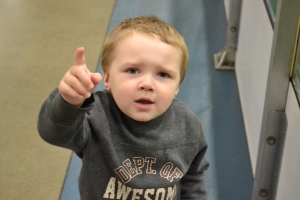 Until next time – Chris

5 thoughts on “The Five Stages of Parenting Embarassment”