I am going to preface this post by saying that the wife had one requirement for me when first starting the blog, and that was to not apologize for long delays between posts. The whole, “I’m sorry that I haven’t written in so long” is a serious pet peeve for her.

So, consider this an explanation, not an apology. Active dad has been, well, active. Very active. In fact, I have a million other things that I need to get done, so I’m going to try and crank this post out pretty fast. Of course, when it comes to writing, I am never fast, as the wife can attest, but genius like this is an art form which cannot be rushed. Wait, what was I talking about again?

Among the activities keeping me busy was a week-long vacation to Disney World and a weekend trip to a select soccer tournament with my oldest daughter, Alexis (8). Both trips were extremely successful. The whole Halloween thing was thrown into the mix as well. It was wet and cold, but still a good time.

Speaking of the soccer tournament, our team (of which I am assistant coach) did amazing. The girls battled back from being down in their final two games to win both and ultimately win the championship. The final game took overtime and penalty kicks to decide it. Alexis is one of the goalkeepers and she was in net for the penalty kicks. She was scared, but incredibly brave. I have never been so proud. Here is a picture of the two of us after receiving the championship trophies:

One of the best parts of the out of town tournaments is being able to hang out with the other parents. We had a little party for the girls, which involved pizza, the hotel pool, and Rainbow Loom. I may need to have a separate post dedicated to this latest tween craze in which I chronicle my adventures in trying to actually find those little rubber bands in the stores.

So while the girls were partying it up, the parents all hung out and talked about anything and everything. One subject that came up is our children’s uncanny inclination for the bizarre and unexpected. As a father of four, I’d like to think that I have seen about every strange personality trait, behavior, and fixation that a young child can possess. Yet, my children always manage to prove me wrong on this point.

In a previous post, I described my youngest daughter’s fascination with garbage cans. Clare (1) actively seeks out any garbage can that she can find and loves to rummage through it looking for snacks. That fascination has also grown to include toilets and splashing the toilet water.

It has become so bad that our house has become a virtual prison in which every door must be shut at all times and that access to most rooms is only granted during certain hours (i.e. nap time and bed time). If a bathroom door is left open (usually by another kid – ahem Alexis), Clare will beeline for it. There truly is nothing worse than finding your toddler running around covered with water, asking her why she is so wet, and then noticing out of the corner of your eye that the bathroom door is ajar.

However, Grayson (recently 3) has managed to one-up the weirdness scale (in a more sanitary way at least) with his love for DVDs. I’m not talking about watching DVDs. That, of course, is not weird. No, he has collected this fat stack of DVDs and carries them with him wherever he goes. “I want my DVDs” has become his new catch phrase and he only says it about four thousand times a day. 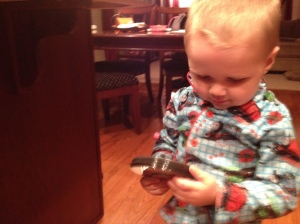 What’s sad is that is only about half the stack. He’s not picky mind you. He will take any DVD (or CD for that matter) that he can find and add it to the stack. So, he has the usual fare of Thomas & Friends and Disney movies, but he has also gotten his hands on my copies of the Avengers and James Bond – Skyfall to name a few.

He takes his precious DVDs with him everywhere. He can’t leave the house without them or screaming ensues. He takes them to bed and cuddles with them at night (I kid you not). They are always present at the dinner table, in the bathroom during bath time, and in his stroller if we go out somewhere.

I’ve never given much thought to the chemical content of DVDs, but maybe I should read about the possible health effects of long-term exposure?!?

I’ll end the post with this picture. I can’t decide if I should call it “the hook” or “the tower.” You decide. 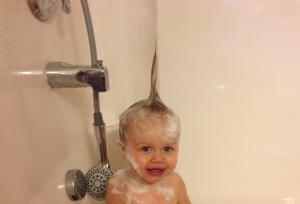 Until next time – Chris (active dad at home)

One thought on “DVDs – My Precioussss, the Champion, and Where in the World was Active Dad?”